A monster hit
SsangYong's Right On Song
THERE'S a place for Chelsea tractors... and it's definitely not in Chelsea.

If I had my way towering threats like the Range Rover, Audi Q7 and Bentley Bentayga would be banned from cities.

All they do is block the roads, kill cyclists, massage pumped-up egos and make the air even more unbreathable than it already is.

However, being the reasonable and fairminded soul that I am, I will admit there are places for them. It's in farms, on building sites, for off-road training, any place where it will be used properly.

Last week a new monster thudded on to my drive. This time it was a 16-foot long, six-foot high giant called the SsangYong Rexton and I'm forced to admit that it was far more than merely impressive. It was fantastic.

Now you may remember that previous Rextons have been so ugly they were nicknamed the Wreckston. Nothing so ugly could ever have been built to assault your eyes.

The new one is actually not-bad looking, if you like that sort of thing, but the whole story of the Rexton just has to be about size and value for money Everything about the Rexton shouts giant-sized. It's colossal.

If its four feet deep boot isn't big enough, fold down the back seats and it stretches to 7ft Gin. If you need to get five rugby players to the match they'll fit in comfortably.

That's because it's got a minimum of eight inches of knee room in the back, and if you want storage bins it's got an eight-inch deep centre console and 14-inch long door pockets, all with bottle holders. Quite simply, it's vast. But if luxury is also one of your requirements, it's not short on that, either.

Sink into one of its heated and cooled electric front seats and you'll find a huge 60 switches dotted around you for choosing four-wheel or rear-wheel-drive, high and low ratio gearbox, brilliant and easy-to-use radio and sat-nav system.

And, oh that one there is for its heated steering wheel. It's all finised in black leather with double white stitching, quilted seat backs and even more quilt on the dashboard, three 12-volt sockets and even a 220-volt one in the rear for when your rugby player decides to shave off his beard.

To be honest, it's kitted out like a Chelsea tractor, too, and unlike some makes, comes with a five-year unlimited mileage warranty, so you  don't need to worry about its super-smooth, new 2.2-litre diesel engine delivering a hefty repair bill.

Instead, you'll get 181hp and a hefty 420Nm (31 lib) of torque which makes it surprisingly powerful for a car that weighs 2180kg - that's two Citroen C3s. Yep, it all looks good for the Rexton, but once you factor in the price it becomes all but irresistible, with only one drawback.

That, of course, is its badge. Today's bunch of selfish giant 4x4 drivers would rather pay at the very least twice as much as the £37,500 the Rexton costs so they can park their badge in an electric cars-only bay.

Only a fool would ignore a price like that. Trouble is, there's no end of them clogging up the roads in four-wheeldrive palaces. 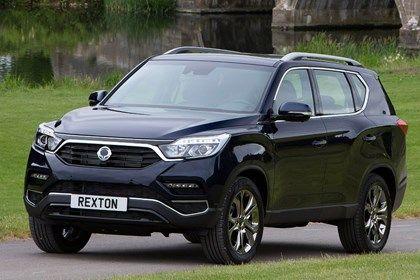